Often when we are set back physically, the best medicine is to just relax and let the body restore and regenerate itself. First it was the knee I sprained falling on the ice. Now it is the return of the winter cough.

So I get the medicines for the cough. I rub linaments on my knee a few times a day. First was a commercially prepared arnica, then the last of aan arnica ointment made by a friend. Next, and currently, one is the Muscle Recovery made by Anita Boehm and other is my Reiki Comfrey Healing Salve. Arnica was appplied . A few ibuprofen helps. I get up periodically to keep the knee from locking up. Then going to the rec center to use the steam room and the pool. The movement of the knee is coming back to normal. Some think that I should not have danced on it last Friday, but I think it helped strengthen it and keep it limber. Hob bath with Epsom salts and hydrogen pyroxide with a bit of eucalyptus drops to open up the lungs and myrrh to heal the body. I am definitely feeling ready to dance again.

The antibiotics and cough medicine are chasing the cough away and breathing is easier now. So have a little chicken noodle soup, sit back and enjoy a good book, or a movie. Then sleep under some nice warm blankets. Healing is happening. Sometimes we just have to allow time for it do work. Meds, movement, sleep, sweat. Stay relaxed in your pace. By Friday night, I will be dancing again. And to think that two weeks ago, I could barely walk.

It is warm. I am resting deeply. Soon I will be up and eager to get going again. Dancing inspired me to keep going.

The healing is almost effortless. I feel that the healing is coming through me and other than apply the linaments, baths, drinking tea and soup, the strength is returning. I am not anxious, just allowing time. It is good. It is what is needed now.
Posted by Pan Dancing at 7:20 PM No comments:

Often people get ambitious at New Year's and make a long list of changes they want to make this year, only to get frustrated and give up on it part way into the year.

Here is a simpler, more powerful way to go about making real changes.

Start by knowing that you cannot have several different number one priorities. For example, once you identify the single most important goal you would like to take action on. Then choose two more important goals. Order these three by priority.

Now your top goal may take longer to achieve, but the second and third might be accomplished in a lot less time. So as you accomplish goals, you can take them off your list of three and replace them with others.

In this way, you get more of a feeling of accomplishment. A list of three is a lot less daunting than a list of 12, but in the course of the year, you may be able to do all 12, by taking them 3 at a time. Accomplish something, feel good about it and then feel energized to accomplish more. If you make significant progress on a list of 3 you feel like a winner, but if you only make progress on 3 out of a list of 12, you feel like you haven't done much.

So if you just change your system of setting goals, you will feel and act like a winner.
Posted by Pan Dancing at 11:04 AM No comments:

We have a whole year of the number 13 ahead of us. Some people feel that 13 is an unlucky number, but taken from another perspective, it is rather a great catalyst. 13 represents an organizing principle in nature. A major catalyst attracts powerful elements around it.

Before the church created the Gregorian calender, which is what we have today, there were 13 months, with 3 weeks in each month, which reflected a moon cycle. The word month comes from moon.

Christ and the 12 apostles.

In the legend of Camelot, there was King Arthur and 12 Knights of the Round Table.Noble purposes and spiritual bonds are primary lessons to come from these knights.

Another famous group of knights, the Knights Templar, were assassinated on a Friday the 13th. The stories associated with these groups still influence many people. Today, who are the greater subjects of interest, Pope Clement and King Phillip of France who orchestrated the assassinations, or the Knights Templar?

There are 13 major joints in our bodies.

Card 13 in the tarot is Death. But death does not always refer to someone leaving their physical body. It usually signifies a rebirth or renewal, the end of an old cycle and the beginning of a new one.

In the playing card deck, there are 4 suits, each containing 13 cards.

There are 12 major constellations around the sun and the 12 signs of the zodiac.

The USA began with 13 colonies. 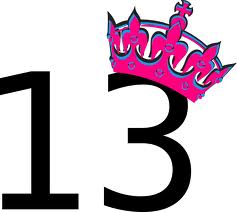 So look at the 13 all year as a sign of an auspicious new beginning. In what areas of your life would you like a new beginning?