When we look at the evolution of the magician card in the tarot, it presents an important question. What is magic?

The earliest tarot decks portrayed the magician as a stage magician, one who makes his living by his wits. Many of us have seen stage magicians like David Blaine, Doug Henning, Criss Angel, Penn &
Teller or David Copperfield and we wonder how that trick was done. Sometimes we get an opportunity to see it real up close and personal like a magician who comes to our table in a restaurant or does tricks at a bar where we are having a drink. Even though this person is right there in front of us, we still cannot figure out where he pulled that coin from, or how he knew what card we would draw. These are practiced skills, and at the root of it, we can say that the magician is someone who makes things happen. 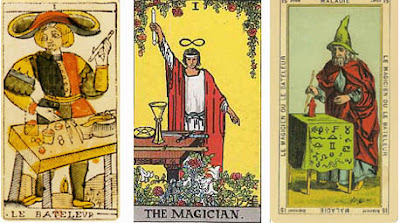 The magician is very creative and very willful. The magician is always an active force, a catalyst. He is also a free spirit who takes his show on the road. Have you changed careers or relationships several times in your life? Have you reinvented yourself? Have you dropped old habits or hobbies or taken up new ones? Then you have made changes in your life according to your will. you have used magic to transform from what you were to what you are.

Now as we see the magician transformed in more recent decks to a ceremonial magician, he uses esoteric and arcane symbols to signal the changes about to come, some of which may be invisible. And this magician also lives by his wits, although in a different way than the stage magician. However, there are other modern decks in which the magician is a shaman, where again magic is afoot, but in a different way. The shaman might affect healing and divination from something from his small bag of herbs, or a simple tool, like his staff, drum, chanting, dancing or casting stones. His stuff is more natural than a magic wand or a chalice. Still, the common thread is there. He makes things happen. We invoke the magician when we want a change.

When we say a person lives by his or her wits, this implies that they are exerting all of their energy and all of their resources to do what they can to make changes in their world, right in front of our eyes. Something is transformed, whether we can see it or not.

We are the magician in our own life. What will we do next?
Posted by Pan Dancing at 7:22 PM